Why dry compressed air is so important?

The term for the amount of water vapour in air is humidity. Just to be clear, “humid air” is not the same as “moist air” (which is a mixture of water vapour and other substances or particles in the  air). Humidity is defined as the total mass of water vapor per given volume of air, it is called the “absolute humidity”. It is commonly referred to as relative humidity, expressed as a % (like on household humidistats). It is called relative because it measures the absolute humidity relative to the maximum. Imagine a cube of 1 metre by 1 metre by 1 metre filled with air; the temperature is 16°Celsius, and the weather is fair. The cube contains one cubic metre of air, which is also saturated with water vapour.

A funny fact about air is that, when it is compressed, it will still hold the same amount of water vapour found in the free air at atmospheric pressure. This means that in the cubic metre of compressed air at 7 bar, there is 7.8  times as much water vapour than the air can hold. The rest condenses and becomes water. Gravity causes it to settle in the lowest and/or coldest sections of your air system.

The liquid water can be drained from the system where it first occurs, but as the compressed air is further distributed to different points of use, more water will be condensed to its liquid form since the air is further cooled. This condensation dissolves contaminants as it passes through air lines, and forms a corrosive residue in the air piping system  and air-powered tools. This residue can also clog filters and small passages in air-operated devices.

The negative effects of water in compressed air systems are:

These all lead to costly repairs. Elimination of water in compressed air systems can be easily achieved with the proper equipment. 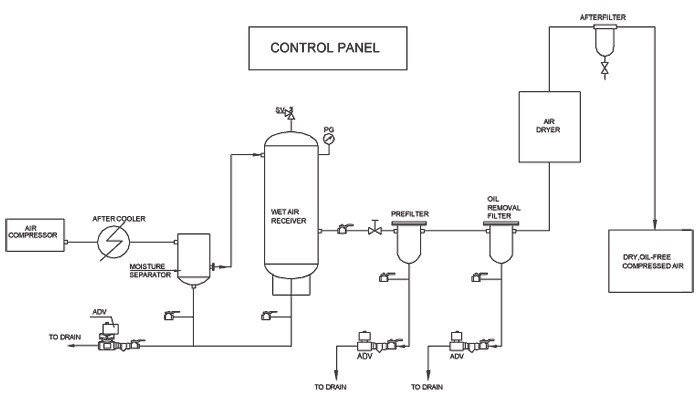