Today I want to touch up on a subject that is not commonly known and often underestimated.
“Using a large oil free VSD rotary screw compressor which needs to cover a wide capacity range”.
Large means above 200 kW

Let me first state that by using a large oil free screw compressor far below its maximum capacity gives you bad energy efficiency and costs a lot of money.

Why?
To answer that question you need to know that an oil free rotary screw compressor or dry lobe compressor has a tiny space between the rotors (lobes). In fact that is leakage. Manufacturers put a coating on the lobes to minimize this gap. However it cannot be overcome. 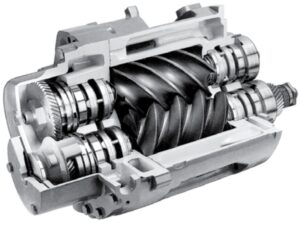 Recently we came across a customer who was advised by the salesman to buy a brand new 900 kW oil free screw compressor with VSD. They already owned 3 older fixed speed oil free screw compressors.
2 things were applicable in this industrial compressed air plant.
1]there were huge leakages in the compressed air piping because of age and
2]the air demand was fluctuating.
The fluctuation had to be compensated by this new compressor resulting in air discharge over a wide range of capacity. Although the power consumption of this machine decreased by a great deal, the efficiency due to the above described phenomenon dropped dramatically. The clients was thinking that he had chosen a great economical gain and contributed to his environmental and CO2 footprint goals, but in fact he had done the contrary.

Large CAPEX and low efficiency could have been prevented.

Want to know how?
This real case shows that there are several possibilities. Contact us to know how we would solve this issue. Not by selling a capital intensive machine but providing you with the best technical and economical solution.